I was at La Jolla Cove, CA at “The Children’s Pool”, photographing the Harbor Seals not long ago, when a friend of mine asked me if I wanted to see a Peregrine Falcon.  I said “sure.” I had never seen a Peregrine Falcon before and did not know really what to expect.  But when I saw her for the first time through a pair of binoculars, sitting on the cliff, I was hooked.  She was so beautiful, and I knew I had to photograph her, and learn all I could about these amazing birds of prey.

When it comes down to it, I believe what I love about Peregrine falcons is their beauty, and what I mean by that is not just their coloring or by their cool underpants that they sport, but rather their speed, strength, power, fearlessness, and their will to survive, and to be top bird despite their small size as they only weigh 2 to 3 pounds and have a wingspan of around  3 feet. In fact they have been known to hunt birds larger than they are.

These amazing birds have not always had it easy, in fact, there was a period of time the uses of DDT as a pesticide during the 1940s, 1950s, and 1960s resulted in a huge decline of peregrine falcons in North America. During this period of DDT use, eggshell thinning and nesting failures were widespread in peregrine falcons, and in some areas, successful reproduction virtually ceased. As a result, there was a slow but drastic decline in the number of peregrine falcons in most areas of its range in North America. DDE, a metabolite of DDT, prevents normal calcium deposition during eggshell formation, resulting in thin-shelled eggs that are susceptible to breakage during incubation. Peregrine falcons feed near the top of the food chain and suffered from the accumulation of DDE due to eating contaminated prey. By 1975 there were only about 370 nesting pairs.

Since the use of DDT has stopped the Fish and Wildlife were able to remove the American Peregrine Falcon from the federal list of threatened and endangered species effective August 25, 1999, as there are to be an estimated  2,000 to 3,000 pairs of American Peregrine falcons in Canada, Mexico, and the United States.

Peregrine Falcons are known to be the fastest bird on earth reaching diving speeds of 200 MPH. They are at the top of their food chain, but from time to time fledglings may be taken by Great Horned Owls, and the eggs may fall victim to raccoons or red-tailed hawks.  Peregrine Falcons eat live birds and sometimes bats, and at times work in tandem, taking turns diving on their unlucky prey.

Most birds build nests made of sticks and soft natural fiber material in which their eggs are incubated. Peregrine falcons lay their eggs in “scrapes,” which are shallow indentations they scratch out with their talons in the soft earth on the floor of their nests. Peregrine falcons typically nest on ledges and in small shallow caves located high on cliff walls. They have been known to use the abandoned nests of other birds, and on the north slope of Alaska, commonly nest on the ground.

They may have 2 to 3 chicks and it may take around 45 days for the chicks to get to the point where they can learn to hunt which takes around a month and a half. Both parents will take care of nesting duties prior to the chicks hatching, however, the female will be in the nest more than the male, and the nest is rarely left unattended as their mate will bring their kill back to the nest so their mate can eat, and/or feed their fledglings.

Peregrine Falcons have only one mate for life and mate in the same territory year after year. The exception if one of the mates dies, then they will most likely find another mate.

Photographing these magnificent birds of prey takes a little patience and well as some time to learn their behavior in order to get some great shots. I almost always use a tripod with a shutter cord while photographing these birds to ensure that I will get a clean clear shot without any camera shake. The exception is when I am photographing them in mid-flight, for that I pan them, as a tripod will be too hard to use.

Like any wildlife subject, give these birds plenty of room especially when photographing the chicks. They will let you know when you are too close by diving on you and screeching as I witnessed this happening to a poor fellow who got to close to a nest. A photo is never worth the well being of the wildlife or your own safety. Have fun, but be smart, and above all respectful of the wildlife and it’s surroundings. 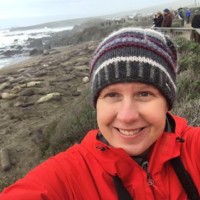 Julie Lorenzen I have been a wildlife photographer for several years now, and enjoy every minute of it. I love the challenge of discovering new and creative ways to photograph my subjects & capture their stories. I believe all animals have a story to tell & it's my obligation to tell it.

2019 © The Wildlife Expression by Julie Lorenzen - All Rights Reserved.